Kouik Tactics Super Agency is a turn based tactical and management game with some random elements and – almost – permanent character death. 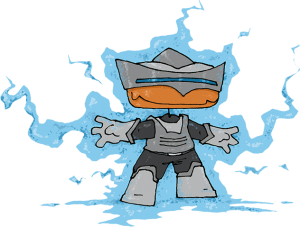 Kouikland is a bloody mess ! Its Kouik inhabitants are not exactly smart – pretty much the opposite – and everything they do usually ends up in chaotic massacres. They do try though. They keep wearing the same clothes in order to avoid mistaking the butcher for the police officer, and it all kinda worked… until a few Kouiks appeared with masks and tight costumes, quickly becoming the new trend in town. Fan clubs, street brawls and explosive gadgets : chaos is about to reach a whole new level…

The non-sense started out with the GiantPowerMixShaker public presentation. That thing can grant any Kouik with real super powers. Having an exhausted trainee operate it during the demo didn’t hit anyone as a bad idea… of course an incident occured, and in a blink the whole governement of Kouikland was being mixed and shaked in the incredible machine.

All Factions started fighting each other right away. Nobody wants a damn shaker to rule the country ! Out of options, the trainee started the machine once again to do the only thing he could think about : creating a Super Kouiks Agency !

And here you are ! The fate of a whole civilization within your hands : everything is up to you !